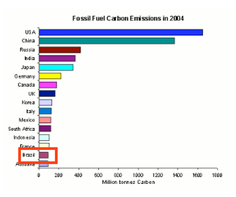 In Curitiba, the energy consumption levels are not very high. Overall, not just Curitiba, but Brazil in general, it’s carbon emissions are one of the lowest in the entire globe. As we can see from the bar graph on the side, Brazil currently ranks second last in fossil fuel emissions. Despite the fact that Brazil has a lot of relatively poor countries, the reason for its low carbon emissions is also because of their usage of renewable energy, energies that can be sustained. 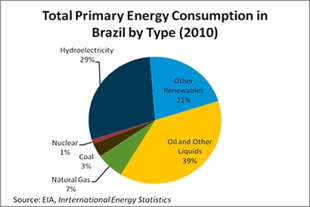 In 2010, around 50 percent of total energy in Brazil comes from renewable sources. Curitiba, being Brazil’s most sustainable energies, we can see that the amount of fossil fuels they use would be much lower than average as well, while their usage of renewable energies would be expected to be higher.  Researches have shown that Curitiba generates 84 percent of their energy from just hydropower. Hence, from this we can see that the majority of energy in Curitiba comes from renewable energies. Following this, we see environmental sustainability, as using renewable energies means consuming less fossil fuels, which would pollute the environment. Moreover, as the consumption of fossil fuels decrease, the large source of fossil fuels would decrease slower, and we would be able to use this source of energy for a longer period of time. Following this, it benefits the citizens of Curitiba's lives, as it would provide them a long lasting energy source. Even in the future, they would be able to use these energies, when the amount of fossil fuels have decreased. Apart from that, due to less fossil fuels being burnt, the air quality would also become better, and therefore make the living conditions in Curitiba more comfortable, and more suitable for human life.

To conclude, how does this benefit the citizens of Curitiba? Firstly, due to using less fossil fuels, less greenhouse gases are produced, which not only benefit local citizens, but also benefit the entire globe. However, apart from that, because the production costs of alternative energy sources are lower, citizens would have to pay less for electrical fees, which would allow them to spend money in other aspects.
Powered by