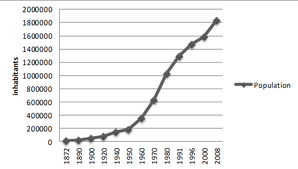 In Curitiba, one of its main benefits is that it has a great bus system. This bus system carries over 2 million passengers per day, and hence we can see how effective it is. Firstly, this effective bus system, has managed to decrease traffic by 30 percent, since 1974. However, while this has happened, Curitiba’s population has nearly doubled. Despite this, we still see a significant decrease in traffic, allowing more convenience and better transport for the people living in Curitiba. This has allowed less traffic jams in Curitiba, saving plenty of time for everybody. This benefits Curitiba socially, increasing efficiency for the citizens, allowing social sustainability. As people have a more efficient and convenient lifestyle, Curitiba is able to sustain the citizens quality of life, giving future generations the same privileges, less traffic, and well organised bus system.

Apart from that, the majority of Curitiba’s population live within 400 meters of a bus stop. From this, we can see that transport is easily accessible to almost everyone. This can more so add on to the reason of less traffic, because the need of cars is lower than other places. Since the bus stops are so easily accessible, most people would rather take the bus, than rather driving, as it is cheaper. Hence, due to the convenient transport, it has benefitted the society overall. Moreover, the bus fare is the same in Curitiba, anywhere. It is not simply obtainable, but also cheap, and can be given to a wide range of people. Thus, the bus system is able to benefit many people, ignoring whether if they are poor, or living in a remote area. It is able to sustain the social lives of almost everyone living in Curitiba.
Hence, we see that the bus system is very effective, and is able to lower the amount of personal vehicles. This can lead to less air pollution, as less vehicles are in use, and hence less pollution is caused per person. From this, we can see that the effective bus system in Curitiba does not only sustain social life, but is also able to allow environmental sustainability. Due to less cars on the road, not just air pollution would be decreased, allowing better air quality, but also the amount of fuel used would also decrease. When this happens, Curitiba is able to attain economical sustainability, as it doesn't use that much fuel, preserving the fuel, allowing future generations to use these resources as well.

Overall, all of these has benefitted Curitiba's citizens to a very large extent. The bus system in particular, has provided convenience for citizens, and efficiency. The bus system is available to all the citizens, and thus the bus system can benefit many people. The cheap pricing has also allowed poorer families to take the bus, to go to work in city centres, and get education. Curitiba's bus system has not only benefitted the citizens current lives, but also for future generations, by saving fuel for them, providing them good air quality, and sustaining a healthy lifestyle and a good quality of life.
Powered by